National Library of Lithuania: Screening of the documentary “Black Honey” and talk

On January 27th marking the International Holocaust Remembrance Day, the National Library of Lithuania invites you to watch the documentary “Black Honey”.

The documentary tells the incredible story of the great Yiddish poet and anti-Nazi fighter Avrom Sutzkever (1913–2010). He led the Paper Brigade in Vilna Ghetto, which saved Jewish manuscripts from the Nazis, survived the WWII as a partisan, testified at the Nuremberg Trials and immigrated to Israel in 1947, where he passionately advocated the preservation of the Yiddish culture, while continuing to create sublime poetry and prose.

This film participated at several film festivals and won a number of awards.

The film is in the English, Hebrew and Yiddish languages with English subtitles. Length 76 min.

After the screening you are invited to a talk between the co-producer, A. Sutzkever’s granddaughter Hadas Kalderon, and the Head of the Judaica Research Center at the National Library of Lithuania Dr. Lara Lempertienė.

The documentary and talk will be broadcast live at the YouTube channel of the National Library of Lithuania on January 27, 3 PM. Viewers will be able to present their questions or leave commentaries in the chat window.

Briefly about the event 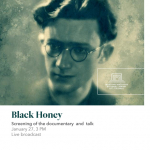 Half a Year of Action: Six Months of Delivering on the IFLA Strategy 2019-2024